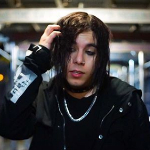 To say Jacob has an attitude problem would be an understatement. He is brash, often overly aggressive, and seems ready to start shit at the drop of a hat. If he has something to say, you're going to listen whether you like it or not, and he doesn't seem to care who he hurts with it. You could easily argue that he's nothing more than an insensitive loudmouth with a chip on his shoulder, but the truth of the matter is far more complex than that. A strong resentment seems to run through every aspect of Jacob, and he is very much beholden to it on an unconscious level. This fact often leads to him pushing things to extremes in an attempt to escape what ultimately amounts to his own mind, and the parts of it that he still doesn't understand.

That said, he is not pure hostility and aggression. He also possesses a innate intellect that often surprises those around him, and would be quite dangerous if he had the motivation to use it. Jacob also has a capacity for kindness - or even outright selflessness - that most wouldn't believe him capable of, though it is very much tinged with his signature biting snark. Just don't go around telling people. Not only will he deny it, but nobody will believe you. That just goes along with the whole 'lone wolf' persona he likes to think he has though...

Hidden deep beneath the volatility, or perhaps existing purely in spite of it, is a sense of childishness in the parts of Jacob that he fights tooth and nail to keep from all but a select few. Knowing this, things begin to come into far sharper focus. While not innocent, he is also not as malicious as he might seem. He had no need to grow up for many years, and then the need to do so was thrust upon him all at once, leaving him lost and spiraling, desperately clinging to anything he thinks might work. Simply put, he had the comfortable foundation of an overprotective family ripped out from beneath him suddenly, and just hasn't hit an equilibrium yet.

Jacob will never deny that he had a relatively easy childhood, especially for somebody born at the tail end of the civil war that spent their whole life in the wastes. Although his parents only ever had two children, with him being the younger one, there was never a moment where he wasn't surrounded by family. Aunts, uncles, cousins, grandparents. They were all around to keep a close eye on the sickly boy, all constantly worried that he would have another asthma flareup, or he might simply stop breathing again.

At the age of 7, however, things began to shift dramatically, starting with the entrance of Bronwyn. Though she seemed barely more than a child herself at 15, Jacob's older brother took a fast liking to the girl, and the young boy saw this as his big brother - his best friend, really - being taken from him. He only doubled down on this idea when the pair decided to break off from the rest of the family to set off on their own in the wastes. For years, he held the belief that Edwin had simply abandoned him, and would often dream of the day when he'd come back for him, carting him off on the adventurous life of a Raider.

As Jacob hit his teenage years, that abandonment turned into more, growing to hate Edwin both for leaving and for not taking him along. The shift in his feelings towards his brother also brought with it other tendencies, lashing out at his family for the smallest things, often violently, and frequently threatening to leave despite fearing what laid beyond the safety of home. In fact, throughout his early teens, he often attempted it, disappearing for several days at a time before coming back, cold, hungry, and scared. He was too soft to leave for good, and he knew it. This knowledge only served to push him further into the volatile mindset that plagues him to this day. Perhaps it was his way of trying to get them to force his hand, abandon him somewhere because he'd become too intolerable, but blood is thicker than water and that never happened.

What did happen, however, hit the Colby family like a ton of bricks. A little over five years ago now, a Raider turned up with news of Edwin's death at the hands of a group of hungry Avarus. Although the entire family mourned, Jacob took the news particularly hard, given that the last thing he'd said to his brother was to scream about hating him. In a rather impulsive move, he harassed the Raider into taking him along when the man left, packing up what he could and promising his mother he'd come back one day. With that, the 24 year old had escaped home finally.

A week into the trip, while the pair were camped out somewhere in Utah, Jacob almost suffered the same fate as his brother when a group of hungry Avarus attacked. He narrowly escaped, having been awake still when the creatures came, and found a tight corner to hide in for the night. By morning, his Raider companion was dead and he was entirely alone. It took several days of wandering, and finding what remained of Salt Lake City, to realize he was in entirely over his head and completely screwed. The temptation to give up then and there was strong, but spite is one hell of a motivator, and it somehow carried him through Idaho and Oregon, and finally into Washington and up to the western edge of Tacoma.

Jacob camped out there for several days, taking shelter in the rotted remains of a half-built house that had been abandoned when the civil war first started. It was there where Bronwyn found him, starving, mysteriously wounded, and utterly incoherent, and brought him to Bosler. The fear that he might not pull through was strong, but he began to come around under Bronwyn's watchful eye. Now, that month spent alone in the wastes is little more than a blur, and he's settled into life around Bosler comfortably enough, though he still hasn't lost his bite.

Bronwyn Colby: Though they were never officially married, he considers Bronwyn his sister-in-law as she is his older brother's long-term partner.