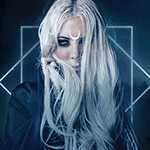 I found the hate you locked away. It speaks in tongues a human couldn't replicate.

Despite being a shrewd woman by nature, Bronwyn comes across as incredibly eccentric thanks to a deep-seated belief in spirituality, a strong knowledge of herbalism, and just a touch of social ineptitude borne from a life primarily lived in solitude. With that being said, she has a strong motherly instinct and cares deeply for people as a whole. No matter who you are, her door is always open for a cup of tea, a sympathetic ear, and well-intentioned (though harsh at times) advice, or even reading fortunes. An altruistic view of the world means that she will happily give what she can without expecting anything in return save for perhaps a little bit of company. She is, however, a big believer in karma, and doesn't suffer selfish individuals lightly.

There are more than a few people who write Bronwyn off as nothing more than a madwoman due to what is seen as an archaic belief in paganism. What some see as an open and frank discussion of nature spirits, the inherent energies of the earth itself, and old wives' tales and superstitions, others view as rambling proof of her insanity. Where the truth lies is unclear, but even those who see her in a positive life suspect a touch of madness beneath the surface.

All niceties and mysticism aside, the few unfortunate souls who actually manage to provoke Bronwyn will be met with a woman with a wrath like no other. While she may not directly do anything, her influence over people can cause harm all on its own. She has a quiet way of turning the general opinion of a person quite sour quite quickly, thanks to a close connection to those in power in Bosler. In fact, its been rumored that she was behind several members of the community being forcibly driven out.

Bronwyn has lived in Bosler for long enough that most people would assume she'd been born in the small community, but she did have a life before. In fact, she still has vague memories of a war-torn Denver, and fleeing from the city with her mother at 4 years old. She remembers living and sleeping in her mama's car as they went from place to place on adventures, and the men. The ones that would come and go, sometimes giving her sweets and all the little things a young girl liked, sometimes giving them a room to sleep in for the night, sometimes making her mama cry.

As she grew older, Bronwyn came to understand that the ever-present fifth of Jack Daniels was what made her mama act funny, and that the men weren't her mama's friends. She came to understand more and more. She saw the end of the war at 11 years old, and watched the country fall. Somehow, she still managed to retain that child-like innocence through it all, busying herself with the tattered books she found in the ruins of old houses when she and mama would go looking for food.

By her fifteenth birthday, however, all of that had changed. Mama had left her with another family, promising to be back before morning, but Bronwyn knew she wasn't coming back. She could never explain how she knew, only that she did, and she made her peace with it that night. What she did know was that the eldest son of the family she was staying with, a strapping young lad named Edwin that was three years her senior, had taken a liking to her, and she reciprocated the feelings.

The relationship began slowly, but the pair soon became inseparable. Bronwyn supported Edwin's dreams of finding a group of Raiders to accept him, and he indulged her odd occult beliefs in turn. In the early years of the relationship, the pair scavenged the Wastes together, never staying in one place for long. That changed when they made their way to the Pacific Northwest, and caught wind of a budding new community; Bosler.

Initially, Bronwyn was hesitant to finally settle down, but Edwin seemed to be won over by the community's charm and its people, and she eventually grew to consider Bosler her home. Although the time her lover spent away from home was hard, she made do and settled into the role of a Hunter, spending her days trawling the marshes for a myriad of edible plants while her nights were spent in the Raider Encampment.

Life finally seemed stable, and even good. An excursion to Seattle, led by the brand new Raider leader, Milo, ended in an Avarus attack on where the Raiders had set up camp for the night, and Edwin was attacked and killed in the fray. The love of her life gone, Bronwyn became a shell of the vibrant woman she'd once been, her days now spent silently wandering through Bosler and the woods beyond, and at night she turned to the bottle, drinking herself into a stupor and then finally into sleep. For months, her crying could be heard from Edwin's bunk in the Encampment, echoing through Bosler for most of the night. At first, it was every night, but eventually it began to lessen, as did her drinking, as time began to heal the wound.

It took a little over a year for Bronwyn to make her peace with what had happened to the love of her life, but the woman she'd once been came back bit by bit with one marked difference. The death of Edwin seemed to drive her even further into her spiritual beliefs, and both softened and hardened her to the world. Her skin thickened to the words of others, yet she began to find herself caring far more deeply for those around her. In death and heartbreak five and a half years ago, she had finally found her peace with the world.

Ryan Bathory: In the past few months, she has come to view Ryan as something of the son she never had, and the two have grown quite close.
Bryce Gavagan: Wholly aware of, and quite entertained by his little crush on her. Though the feelings aren't reciprocated and they're both aware of it, she does enjoy the attention she receives.
Milo Bromwell: The pair share a strange relationship, and they share an unspoken rule of not properly explaining the situation.