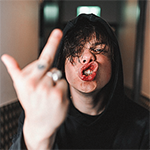 Its not all gold and glory. I gave my life for this.

Milo is a man perpetually pulled in different directions.

On one hand is the fearless Raiders leader who will stop at almost nothing to get a job done. While he is harsh with the other Raiders, he also has a solid respect from them, as he would never put you in a situation he wouldn't put himself into, or lead you astray. Despite being more than willing to work, he is more known for being the thinker, always having a plan, even if he only tells you on a need-to-know basis. He is not only intelligent, but eerily intuitive at times, and unafraid to show it.

To the people of Bosler, he is a little bit strange. He tends to act indifferent or even cold on the surface, but is always willing to help where he can. In his eyes, the people of this little ramshackle town already deal with enough, so if he can offer a hand, or scavenge something from a dangerous area, he happily will. He believes that everybody, including the Avarus, deserve a fair shot at surviving, and doesn't mind leveling the playing field to see that it happens.

What nobody but the few closest to him see, however, is the abandonment issues and guilt that drive him to behave as he does. He has a bad habit of not feeling like he's good enough, or that every bad thing that happens is somehow his fault. While wallowing in the ghosts of yesterday is tempting, he instead chooses to bury them away, and use whatever bubbles to the surface to fuel the mask he presents to the world.

Life for Milo started out rough, and unstable. Born in Maine, the boy traveled the state throughout much of his childhood with his mother, older brother, Greyson, and a small group of others. Though he didn't know it at the time, being far too young to understand such concepts, the group survived by stealing from others, and killing anybody who dared resist the theft. All Milo was aware of was that mommy and her friends would leave their little camp at random, and Greyson would take him on their own little adventures to the shore, or whatever would capture a small child's attention.

As he grew up, Milo recalls the group moving further afield, leaving Maine to continue their thievery and nomadic lifestyle across the East Coast. Soon enough, he was participating in the thefts, often serving as a distraction, though his smaller size did come in handy when it came to breaking into places as well. Being the only life he'd ever known, he seemed perfectly okay with living this way, but he was becoming slowly yet painfully aware that Greyson didn't share the sentiment.

Not long after Milo turned 13, his brother's feelings on the lifestyle came to a head. He woke up one night to Greyson frantically packing a bag to escape, and the next thing he knew, he was doing the same. Life outside of the relative safety they'd grown used to was difficult for the brothers, but they made it work, traveling cross-country to the West Coast. At least, until Greyson fell into the downward spiral of addiction. Milo did what he could to help keep his brother level, but there was only so much a teen could really do. That's when they encountered the Raiders for the first time properly.

Not knowing any better, Milo quickly joined up with a group of Raiders somewhere in California in hopes of getting his brother the pain killers that would stave off the junk sickness. It didn't take long for the 16 year old to get wrapped up in a double life; helping people by day with his newfound friends, yet robbing their medic blind by night to keep Greyson level. Before he knew it, he was in over his head with the whole thing, and then one morning, he woke up to find his big brother just... gone...

While he tried to stay in hopes that Greyson would turn up again, the worry began to get to him, and he soon broke off from the Raiders to search for his brother. The hunt led him through what felt like hundreds of dead ends over the span of the next year, and these missteps eventually led him to Bosler. While he never gave up the search, life has a funny way of happening, and he quickly found himself at the helm of an uprising against Bosler's current Raider leader at the tender age of 19.

To ask him about it now, he will claim that span was a blur, but he does in fact remember the fateful night and the next morning when the body washed up on shore, a bullet in the back of the Raider leader's head. Suddenly, he was thrust into the position, one he'd never wanted but had no choice to accept. In the six years since, he's made his fair share of mistakes and still holds onto the hope that Greyson will turn up one day, but as long as each day is better than the last for the residents of Bosler, he's a happy man.

Plácido Dimas: His closest confidante, and something like a surrogate older brother. Cid ensures that Milo doesn't loose the forest for the trees, and he entrusts his fellow Raider with his life.
Greyson Bromwell: Milo's actual older brother, whom he lost track of some time ago. He just hopes Grey is still alive somewhere...
Bryce Gavagan: The pair have a complicated though generally friendly relationship. While Milo can be easily annoyed by Bryce's boundless energy, he quite enjoys the discussions they often share over cheap moonshine.
Bronwyn Colby: The pair share a strange relationship, and they share an unspoken rule of not properly explaining the situation.