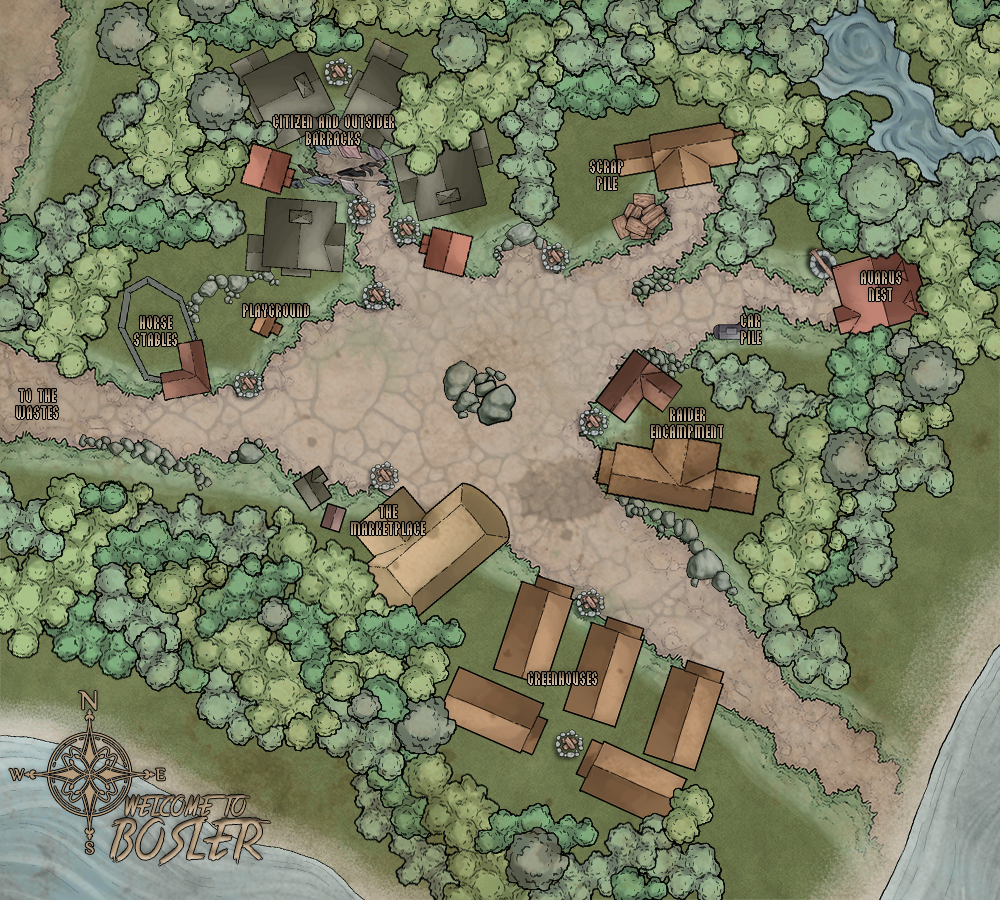 Click the map to enlarge it. After a decade-long civil war quite literally tore the United States in two, six of the United State's major cities managed to survive; New York City, Charlotte, North Carolina, and Washington, DC on the east coast, and Los Angeles, California, Portland, Oregon, and Seattle, Washington on the west coast. Of these six, New York and Los Angeles are considered the main hubs of all human life in the country, while the smaller cities on each coast serving to support them. Seattle and Charlotte are essentially sprawling general labour camps for their respective coasts, housing the majority of factories and farms and serving as thoroughfares for goods being transported between the cities, while Washington and Portland serve to house off-duty military personnel and massive warehouses to store extra supplies. Due to their heavy military presence, entering Washington or Portland is deemed the highest risk of any of the cities, and thus not worth it when the labour camps are far easier targets. Regardless of the city, poverty and crime is the norm, and military raids on citizens' homes to seize assets are far too common. This is why many people choose to take their chances in the wastes in small communities, and the Avarus simply have no choice.

Bosler, Washington is one such community. Nestled into the forests of Vashon Island, the community of Bosler has a similar story to many other communities founded in those first post-war years. Built on the rotting remains of a long-abandoned children's summer camp, the small community boasts a population of around 200, and communal living is very much the norm. For the most part, life in Bosler is simple and quiet. Residents typically make a living by producing food via the gardens or hunting, scavenging the wastes, or by trading their wares in the Marketplace. When night falls, however, the idyllic peace and quiet Bosler enjoys turns into something far more fearful. The Avarus - docile and friendly under the light of day - lurk in the shadows, ravenous for warm flesh and blood, and are willing to take it from any source that presents itself, human or animal. The only hope Bosler has of keeping the Avarus at bay is hunting for larger game by day, and the watchful eye of the Raider's night guard.

Flash Events
Think of flash events as a miniature version of subplots that happen randomly, sometimes once and other times more regularly. Contained to a single thread or sometimes a temporary subforum for larger groups, they will typically have minimal planning, letting members take full control of the direction. Staff may impose certain restrictions or terms, such as limiting the number/type of characters involved, limiting character access to resources, and so on. A full explanation will be available in the first post of each flash event thread. No signups are required for flash events; its simply a matter of jumping in with a character and replying to the given prompt/posts above yours. Examples of flash events include, but are not limited to; air drops of supplies that miss their mark, dangerous animals roaming through the community, celebrations/parties, fires, extreme weather events, and military raids. As always, we are open to member suggestions in Member Services.

This is just general world building information that didn't quite fit in elsewhere. It will be updated and added to as needed, and members are more than welcome to suggest additions in Member Services. Simply click on each section to expand and read it.