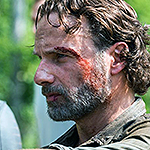 AJ often comes across as something of an asshole. He doesn't let people get close to him, and although he's quite a private person, he never hesitates in letting his thoughts and opinions known. He finds it much easier to make enemies than friends, and that's exactly how he likes to keep things. He spends most of his time acting the strong and silent type, and a neutral, stoic expression is his default. He has all the makings of a loyal dog, doing what he's told, when he's told.

However, an extremely select few have either seen behind the facade, or are able to see right through him. He's surprisingly gentle and considerate, and he picks his way through the underbrush much like deer do. When it comes to the others who reside in Bosler, whether they're long time residents, outsiders or Avarus, he treats them all with respect and dignity, even if they don't show the same courtesies to him. His gruff and stern exterior is more of a show for anybody who stumbles across their town, or the raiding party at large.

He finds it difficult to open up to others, despite any long term friendships he might have forged, simply because he seems no point in dwelling on the miseries of the past. The last thing he wants is someone to feel sorry for him for everything that happened to him, because he feels that they have all suffered in one way or another, and that the best thing to do is more forwards as a group.

AJ was born in 2019, the year before everything started going to absolute shit. His life started full of so much promise, but who could have guessed how things would go the following year? It started with the wildfires in Australia and the threat of World War III. Next came the virus that took the lives of his mother, father, two brothers, two aunts, one uncle and all of his grandparents. He was left in the care of his only surviving blood relative, who managed to guide him through those first few early years until everything, almost literally, went to hell.

More riots marred AJ's sixth year of living, though to his uncle that was nothing unusual. Civil unrest had been rife since the early years of the decade, and the rising of the pre-Avarus was just the final straw that broke the camel's back. Luckily, AJ and his uncle lived outside of it all, on their own estate quite far from the major population centres. Unluckily, as things progressed and gradually got worse, more and more people left the larger cities and began travelling, searching for only the Gods knew what.

AJ watched his uncle killed by a particularly nasty group of individuals who decided they wanted the estate for themselves. He fled in the ensuing madness, eventually stumbling across a small group of people who took him in. It was there that he met his wife, though in his love struck state he didn't quite notice that she tended to disappear every night, and that he wouldn't see her until the morning. Eventually, however, he put two and two together. She was an Avarus, and though she was ready to run upon him finding that out, he convinced her that it didn't worry him. And it didn't.

They lived together for a few years before she died at the hands of a man AJ didn't know. He wasn't there when she died, of course, as it happened in the middle of the night. He did, however, find her body the following morning after growing concerned that she hadn't returned. Needless to say, he left the group that had sheltered him for all those years in his grief, vowing never to return.

He stumbled upon Bosler quite by accident, and though he still harbours doubts over whether joining another group was a bad idea, he settled in fairly quickly with the other residents. He put himself forward to join the raiding party as soon as he was able to, and hasn't looked back since.

Milo Bromwell - despite the massive age difference between the two of them, AJ has a lot of respect for Milo and everything he's achieved. he listens whenever Milo speaks, and there's a strong possibility that AJ seems him as some sort of surrogate son

Vincent Matthews - the two of them know sensitive information about the other that neither of them want made public. to say they have a rocky relationship would be extremely generous. however, the bond they share, though moderately fragile, is quite deep