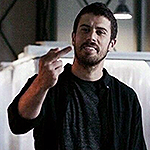 Without pain, without sacrifice, we would have nothing.

Before everything happened and he was displaced from his home, Brendon was a bit of a shy fellow. He hated being the centre of attention, and would go out of his way in order to have the attention taken off of him. He was incredibly kind and considerate, helpful to anybody who needed it, and always there if someone needed a shoulder to cry on. He wasn't afraid to show emotion, though generally kept it well hidden, and cared about his friends and family deeply. He had his struggles, much like everyone did, but he was always able to bounce back again.

And then everything went to shit. Things hadn't exactly been perfect beforehand, but when chaos descended it hit hard. Brendon learned pretty quickly that his previous way of living and thinking just wasn't going to cut it. Trying to negotiate with someone aiming a shotgun at you wasn't a good idea. As the years went on, the tougher he got, refusing to take shit from anybody. He developed the skills he needed to survive, and to hell with anybody who decided to get in his way. He grew more comfortable with violence, not caring or feeling much of anything or for anyone. His main focus has stayed the same for a long time; survive. Survive in the names of the people he'd lost.

Height
1.85m
Build
Lean
Hair Colour
Brown
Scars and Marks
Quite a few of varying shapes and sizes across his body
History

Brendon was born during a very turbulent time. He never knew what it was to have peace in the world. He never knew what it was like to not feel pangs of hunger for days on end. His parents did their very best, though, and even amidst all the chaos around them, they raised their son to be respectful and mild mannered. Going outside to play was a foreign concept to most children at that point, but how could anybody miss what they didn't have? Rioting was commonplace, being attacked on the streets was commonplace. Living in fear in the night of what may have been roaming out there - whether other humans or Avarus - was a constant reminder of the horror that had been inflicted upon mankind. And yet, even in the bleakest of times, bonds of friendship were created. Bonds so strong that they endure even to this day, whether Brendon acknowledges it or not.

Reality struck the day his home was raided; his family scattered to the winds, his modest home ransacked. He had fled with just the clothes on his back and the shoes on his feet, not knowing what had happened to his family, not daring to return to find out. He'd ran and hidden, staying put for a few days before he emerged. Once he'd plucked up the courage, he'd ran as fast he could to the house of the person he'd cared about the most. On hearing the fate of his most beloved friend, Brendon had fallen into a deep despair. He wandered, aimlessly, eventually being picked up by a small group fleeing the city. They nursed him back to health and took them on their way, but even that group was fated. They were attacked by Avarus in the night, and Brendon again found himself alone, after fighting his way out of the onslaught. The survivors of the group all ran in different directions.

Alone became how Brendon preferred it. He swapped the company of others to the voices in his own head. He adapted to surviving with little, or nothing. And he wandered. He never stayed in one place for too long, stealing what he needed whenever he could. Violence became the norm, no matter where the danger was coming from. Loneliness does things to people, and Brendon would definitely be considered 'odd' to polite society.

He'd heard of a lot of safe havens over the years, but never dared believe it. It was better for him not to hold out hope of seeing familiar faces again. After all, he doubted they would recognise him anymore.

When All Hope Was Lost