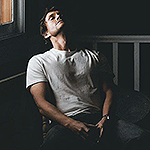 Slander is worse than cannibalism.

Vince is something of a contradiction. To look at him, you would be safe to assume he's perfectly normal, safe to be around; someone you can have a normal conversation about normal things with. And while he does tend to live up to that view, there's a lot more to him underneath. He maintains an air of innocence, even foolishness at times, pretending to be more level headed than he actually is. He is generally friendly, often finding it easy to interact and socialise with others, makes friends quite quickly and displays a fierce loyalty not usually expected from people such as him.

But beside that, underneath, he's very much the opposite. He's honed his skill over the years of making people trust him, helping people feel at ease around him. He uses that to his advantage. He is cold and calculating, and if he's watched during the right moments, that comes through extremely clearly. He is methodical and tends to plan things out to the wire. If need be, however, he can adapt and carry out his plans swiftly and effectively.

On the whole, as long as you're not his intended target, Vince is a friend for life. If caught off guard he tends to let his emotions control his actions. He feels deeply and with great intensity, which is both a blessing and a curse.

Height
1.8m
Build
73kg
Hair Colour
Brown
Scars and Marks
Scars; two gunshot wounds to the left shoulder/arm, one to the right - self harm scars across both forearms and outer thighs - a few scratches across his jaw on the left side
History

Vince has lived a fairly traumatic life. His childhood - something he doesn't really like to talk about - was anything but the ordinary happy family routine. Although it gave him the drive to live as much as he could, he never really got the chance to have the sorts of things a lot of children take for granted. As soon as he was able to, he got away from his parents, even getting away from his home town, and moved as far as he possibly could. It was a tumultuous time, even away from his parents, and Vince spent a lot of time running and hiding. He developed his skills in the early years of the war, and his blood lust made itself known. He knew, however, that displaying such behaviour was likely to make him a target.

How he survived alone, travelling from one war torn street to another, even he doesn't know. Countless nights he spent clutching the rudimentary weapons he'd made, wide awake, waiting for a bomb or a stray bullet to tear through his hiding place. When he managed to find actual weapons, his ammunition was limited, and his knowledge of how to use it even more so. For a long time he ran on autopilot, fuelled by fear and adrenaline, eventually giving up eating normal food - as scarce for him as it was - and started eating from the bodies of people he came across. He had enough sense to hold out as long as he could and find those who were dying from their injuries, but every now and then he had no choice.

He was still technically a child when he stumbled into Bosler, tired, sore, and angry, but older than his years. For a while he had a dead, haunted look behind his eyes, and he did as he was told much like a mindless drone would do. As he grew, however, he came back into himself, enjoying things people of his age usually would do, but there was always a darkness to him which manifested itself in deliberately hurting other children, throwing rocks at birds, catching and hurting other small animals. He kept the latter mostly to himself, and grew out of acts of such cruelty as he reached his teens, which was when he put himself forward to help in different ways than what he had been doing.

In his early days of being a hunter, he hit a few stumbling blocks. Though he'd been able to forage and fend for himself, he had the needs of the rest of the town upon his shoulders, and he often forgot that. He had to learn how to share - something he wasn't really taught as a child - and it was difficult for him at first. The more he hunted, though, the more important it became for him to really try. As a result, while he does provide as much as he can, he occasionally keeps things he finds for himself. Most notably particular items of meat he knows full well would result in his forcible removal from Bosler, or worse.

Bronwyn Colby - seeing as they're both hunters, a lot of the time they have no choice but to work together. This doesn't bother Vince, as he really rather likes her. He doesn't throw the word 'friend' around willy nilly, but he would definitely consider her as one.

The Space Inside My Head

Lurking in the Forest