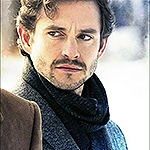 Slander is worse than cannibalism.

Preferred Face Claim: Mads Mikkelsen
Age Range: late 40s, early to mid 50s
Relation to My Character: Romantic interest; maybe a frenemy to friends to lovers type thing?
Character Type: Avarus
Additional Details: Ideally I'd be interested in this character to be, essentially, almost the complete polar opposite to Vince. Someone who was naturally loving and nurturing, though who is able to stand up for themselves when they need to. Definitely not a push over sort of person, just someone who would be able to look passed the bad in another person and see the goodness underneath. Level headed, passionate, clever. Someone who would understand how history can affect a person in the present. They can have as much or as little personal baggage as you want, and their history is entirely up to you.
On the whole, you would have free reign over every aspect of this character. I don't have any specifics other than what I've already mentioned, and I have absolutely no issue in discussing the entire creation process.

Vince's Personality: Vince is something of a contradiction. To look at him, you would be safe to assume he's perfectly normal, safe to be around; someone you can have a normal conversation about normal things with. And while he does tend to live up to that view, there's a lot more to him underneath. He maintains an air of innocence, even foolishness at times, pretending to be more level headed than he actually is. He is generally friendly, often finding it easy to interact and socialise with others, makes friends quite quickly and displays a fierce loyalty not usually expected from people such as him.

But beside that, underneath, he's very much the opposite. He's honed his skill over the years of making people trust him, helping people feel at ease around him. He uses that to his advantage. He is cold and calculating, and if he's watched during the right moments, that comes through extremely clearly. He is methodical and tends to plan things out to the wire. If need be, however, he can adapt and carry out his plans swiftly and effectively.

On the whole, as long as you're not his intended target, Vince is a friend for life. If caught off guard he tends to let his emotions control his actions. He feels deeply and with great intensity, which is both a blessing and a curse.