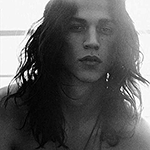 Show me those pretty white jaws, show me where the delicate stops

River's something of a trickster, someone who likes making jokes and pulling pranks. Granted his opportunities for pulling said pranks are rather few and far between, but he enjoys them whenever he can. He doesn't try to hide who he is with any kind of facade, having decided when he was young that it just wasn't worth it. He's friendly enough, with a healthy level of sarcasm behind him, and he isn't afraid to stand up for himself, or fight for those he cares about. He likes to act the fool, but definitely knows when to take things seriously. He's a hard-ass with a heart of gold and an unwavering loyalty to his kind.

When he's not trying to get a rise out of people, or trying to make them laugh, he's quite a stoic individual. His neutral expression is very hard to read, and even at the best of times it's almost impossible to know what he's thinking. It doesn't take much for him to pass judgement upon another based on their actions, and he has been known to be quick to temper.

He's extremely suspicious of new people, human and Avarus alike, and much prefers to try and get a read on them from a distance rather than introducing himself right out of the gate. If he deems anything a threat to him and his, he won't hesitate to attack.

River was lucky in that he was born in a relatively safe space for his kind. It didn't stay that way, of course, but by then River had been taken out of the camp by his father. He was taught a lot about his mother in his formative years, learning everything there was to know about her at his father's knee. He also learned how to defend himself, as well as how to take care of himself. His father's teaching methods may not have been ideal, but they helped develop strength and independence in River before he hit his teens.

The two of them travelled around a lot for a while, ducking and diving from one place to another, settling where they could (which was never for very long), feeding when they could. They formed a small group and for a short period of time they conducted attacks on small human camps in order to get supplies - as well as to train the young ones. River was a natural, as expected.

In his early twenties he was, unfortunately, split up from his group and his father, which very much brought an end to his shenanigans. Things got very real for him very quickly, and though he knew what he needed to do in order to survive, he was in shock and mourning, as would be expected. He travelled aimlessly, attacking mindlessly in his anger, and doesn't even remember which direction he'd originally been travelling in.

He's the delicate balance of being a loner and loving having company. Now, having hit the age of thirty, he's less inclined towards the loner lifestyle and is looking to settle into a new group of Avarus.